With a mallet and chisel, he kept pitching away,
Till all that wasn’t needed was gone.
He polished each facet, smoothed the edges,
Till better versions of us were re-born. 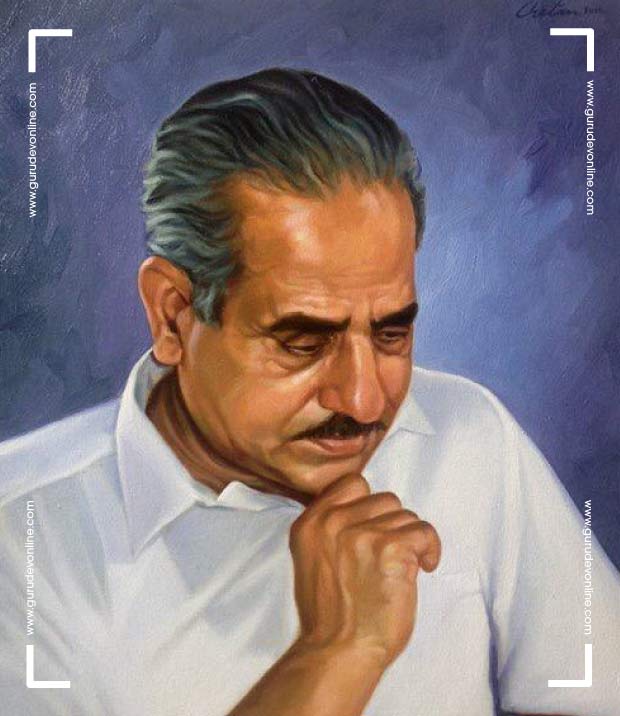 Not only did Gurudev focus on the correction of his attitudes or gunas, but also worked his transformative magic on his disciples.

Ashok ji, a disciple, recounted his own story of transformation. Being hot-headed, he got into physical brawls quite regularly. Despite Gurudev’s advice, he was unable to get rid of his anger. For three years, Ashok ji cut a sorry figure whenever Gurudev asked him, “Beta, Gussa kam hua? (Son, has your anger lessened?)”

Upset with himself for not following his Guru’s advice, Ashok ji resolved to do whatever was needed to manage his anger issues. For three months, he did not get into a brawl or lose his temper. Every time he visited Gurgaon, he silently hoped that Gurudev would inquire about the progress he had made, but Gurudev never did.

After three months of anger-abstinence, Ashok ji’s resolve failed when a worker at his factory was caught stealing cash. Despite repeated requests that he confesses to his crime and return what he had stolen, the worker refused to admit wrong-doing. Ashok ji’s anger re-reared its ugly head and he hit the worker. When he picked up an object to slam into the worker’s body, he felt an invisible force prevent his hand from going through with the action.

When Ashok ji visited Gurgaon a few days later, Gurudev asked him, “Beta, gussa kam hua?” He approached Gurudev with the intent to confess, but the latter placed a finger on his lips gesturing that Ashok ji remains silent. After the crowd in the room had dispersed, Gurudev said, “Even if you are certain that someone has taken your money out of the box, you should believe him when he pleads innocence.”

The omnipresent Mahaguru already knew what his disciple had done! Realizing the error of his ways, Ashok ji changed his attitude for good. He is no longer upset by criticism nor is his mood affected by the harshness of another.

While Gurudev used the gentle touch to teach Ashok ji a lesson in the control of emotions, Giri ji did not have it so easy. Giri ji, who owned a factory on the outskirts of Mumbai, slapped a worker who misbehaved with a member of the office staff. When Giri ji reached home that evening, his sister opened the front door with the words, “Gurudev is on the phone and he wants to talk to you.” Gurudev scolded him for his violent behaviour and warned him that he would break the hand with which he had slapped the worker. Giri ji knew he was done for.

Fearing the inevitable, Giri ji did not leave his house for three days. On the fourth morning, his father commanded him to stop shirking his professional duties and be present at work. Being a cautious man, Giri ji insisted on sitting in the middle rear seat of the car, with his father and uncle on either side to buffer the impact of the possible fructification of Gurudev’s threat. He heaved a huge sigh of relief when they managed to reach the factory unharmed.

In the evening, Giri ji’s father asked him to make a short 3-minute trek to the adjacent factory to attend to some work. Giri ji decided to cover the distance on a scooter, which he drove at a snail’s pace. Just as he reached the parking lot, a motorcyclist came out of nowhere and crashed into him. The impact fractured the hand with which he had slapped the worker.

The lesson was learned. Giri ji cracked the code and a bone as well!

In the nascent stages of my spiritual journey at Gurgaon, Mohan Singh Chira would verbally bully me. Unsure of protocol and unwilling to create a scene, I allowed his behaviour to develop into a pattern. Even though Chira was always well-intentioned, his abrasive manner eroded my self-confidence.

One day, when Chira was ordering me around, Gurudev summoned me to his room. He touched my head and forbade me from being dominated by anyone. I was instructed to never bow before any man or spiritual power going forward. He told me that I had reached a stage where I needed to respect myself as much as I respected others. Gurudev’s words became the catalyst for the resurrection of my self-confidence. And the cat shapeshifted into a lion!

When I entered the room where Chira was seated, he returned to his bullying ways. But this time I was done with his belligerence and gave him a shot of counter aggression he least expected. He has been in awe of me ever since.

Gurudev was omnipresent
and knew what facets of our personalities
he had to enhance, mitigate, and alter.

By weeding out certain habits, attitudes, and conditioning, he lay the groundwork for our emergence as the evolved beings he knew we would eventually become.

NEXT  >>  A SPIRITUAL POWERHOUSE