Mission accomplished he returned
to the higher dimension from where he came.
His spiritual legacy continues to thrive
as multitudes are still served in his name. 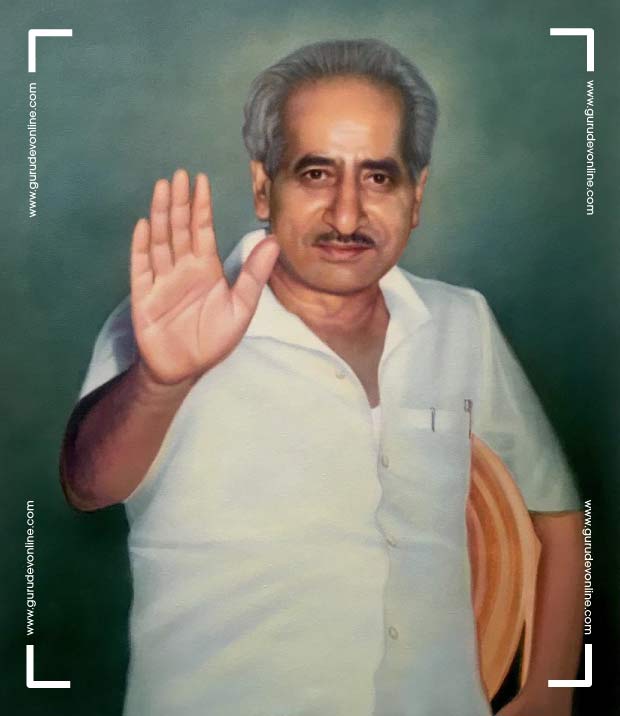 Gurudev decided to leave his body in 1991, at the age of 53, to continue his spiritual pursuits in the afterlife. He chose July 28th to depart from this earthly realm. His mortal remains were interred at Neelkanth Dham, his samadhi in Najafgarh.

The mahaguru oversaw the construction of his final resting place and prophesied that those who visited the Dham would be relieved of their suffering. True to his words, Neelkanth Dham is a spiritually charged location where people continue to be helped and healed. Many people claim to have sighted Gurudev there decades after he left his body.

In August 1991, three of Gurudev’s devotees – Narinder ji, Virender ji, and Saroj ji – paid a visit to the Brighu Samhita’s custodians in Saharanpur for a reading on Gurudev. Surprisingly, Sage Brighu had predicted their arrival for this reading several thousand years ago!

According to the Brighu Samhita, ‘On the snow-capped elevation of Mount Kailash, in a spiritual dimension called Shiv Lok, live hundreds of highly evolved beings who are ganns of Shiv. These ganns descend to the earthly realm to carry out covert missions. They keep their identity and purpose hidden during their time on earth. They return to their spiritual abode when their earthly mission is completed.’

Sage Brighu describes Gurudev as a divya aatma (enlightened spirit) who descended to earth to fulfil a spiritual mission. He lived an ordinary life, never revealing his true identity or purpose to anyone. He was called many reverent names during this incarnation, but no one called him what he was – Shiv swaroop (manifestation of Shiv).

The readings in the Samhita further enunciate, ‘The Ashvin Kumaras (physicians of the deities) assisted him in special healings. When he returned to Shiv Lok, he appointed eleven disciples and five ganns to carry on his legacy. However, in his metaphysical form, he returns to his Dham in Hastinapur’s northern outskirts daily to serve.’

Gurudev, being a man of mystery, never revealed the identities of his chosen eleven disciples and five ganns. He was so secretive that even Sage Brighu was unaware of their true identity!

The mahaguru completed his predetermined mission of spiritually knighting around a hundred disciples before leaving his body. He remoulded our personalities, attributes, and aspirations, leading us on a journey from the physical to the metaphysical. Through his actions and philosophy, he inspired countless others on the path to spiritual transformation.

Gurudev’s seva continues at numerous sthans that he and his disciples have established in cities all over the world. Approximately thirty to forty sthans continue to function like they did when Gurudev was in his physical form. The disciples he trained have gained decades of experience and are training a younger generation of spiritual knights-in-the-making.

The cheese has matured to cheddar!

Gurudev appears in people’s dreams and visions to this day, healing them of ailments, inspiring them to transform, and facilitating their reconnection with the divine within.