The queen he wed became his pillar of strength,
The Shakti to his Shiv.
She took on the mantle of mother to his clan,
Serving selflessly as long as she lived. 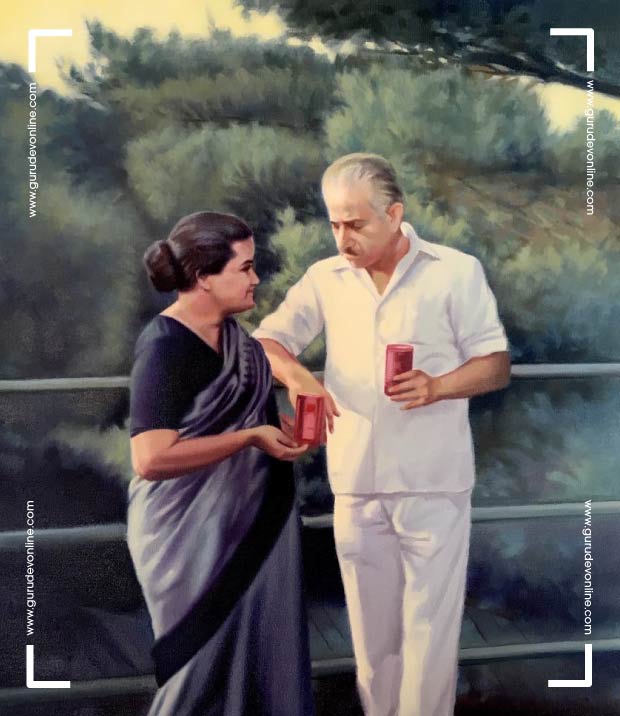 Gurudev’s parents began looking for a suitable bride for their son as soon as he found his professional footing. Their search came to an end in 1960, when Gurudev married Sudesh Sharma, a 20-year-old lady from a well-respected family in Ludhiana, Punjab. Years later, she became known reverently as Mataji (mother).

Mataji’s father was a coal trader who died when she was a child. She was the youngest of seven siblings, with four brothers and three sisters. Her oldest brother was a well-known freedom fighter and member of the Indian National Congress, and her other brother was a teacher.

In an interview I conducted a few years before Mataji died, she recalled having no idea of Gurudev’s spiritual leanings at the time of their marriage. She discovered him unconscious on the bed about a week after their wedding.  Assuming the worst, she dashed to her sister-in-law’s room pleading for assistance. She relaxed after Gurudev’s sister told her that Gurudev would go into a comatose state during paath (meditation) and that she shouldn’t be concerned. Mataji laughed as she remembered her first encounter with her husband’s spiritual side.

Their marriage, like most, had some teething issues. After a few weeks, Gurudev decided to practise sanyaas (renunciation) in a modern way. As a renunciate, he left his marital home to pursue spiritual attainment.

Five years later, while meditating at Gurudwara Sri Santoksar Saheb in Amritsar, he heard a voice tell him that his final attainments were only possible if he fulfilled his responsibilities as a husband. Soon after, he returned to Mataji and settled into the life of a householder. Years later, he taught this concept of grihasth ashram to his disciples.

Gurudev, who affectionately referred to his wife as ‘Master’ (she was a schoolteacher), was a kind and attentive husband whose sense of humour had her in splits. Prior to his advent as a mahaguru, their lives were filled with simple pleasures such as riding on Gurudev’s cycle or scooter and watching late-night movie shows.

When Gurudev once told Mataji, “Master, wait and see what I become at 35!”, she innocently assumed the prophecy meant a promotion at work and a salary increment. Little did she know that he was referring to the age at which he would catapult from a householder and spiritual seeker to a mahaguru. She remembered this story with glee, almost making fun of her conjecture.

Mataji met the expenses of running her household with the money Gurudev gave her and the salary she earned as a schoolteacher. Even though she never complained, running a home on meagre finances while raising young children was no cakewalk.

Renu ji, Gurudev’s daughter, was walking through the market square with him one day when she noticed a roadside vendor selling milk. She asked her father for a glass of milk, drank it, and then asked for another. When Gurudev returned home, he inquired as to why Mataji had not given Renu ji milk before leaving. Mataji then informed him of their precarious financial situation, which prevented them from purchasing milk on a daily basis. The incident is said to have disturbed Gurudev, who spent the night wondering if the spiritual path he had chosen was right for his young family. However, as dawn broke, Gurudev was more certain than ever that he would spend his life in service to others, no matter what personal sacrifices lay ahead.

Mataji became a supportive partner and facilitator in this journey. She was the shakti (feminine principle) to Gurudev’s shiv (male principle), shouldering the responsibility of looking after the household while he focused on seva.

Mataji was frequently perplexed by Gurudev’s understanding of all things spiritual. She couldn’t fathom the source of his knowledge, which rivalled that of the great sages and gurus of yore, because she had only seen him read Urdu newspapers or detective fiction like Colonel Vinod. In the early years of their marriage, she was too innocent to accept the concept of his third eye-opening and the inherent power in his intentions.

Gurudev, despite his spiritual knowledge, never imposed his belief system on his wife. He was pragmatic, frequently encouraging her to adhere to her own spiritual and religious practises. He once told her that she didn’t need to chant any mantras because half of the benefit of his nisvarth seva (selfless service) and paath would accrue to her anyway. Years later, he gave her the powerful Mahagayatri mantra. Mataji recalled Gurudev ribbing her and telling her to stop chanting mantras lest she become more powerful than him. Gurudev and Mataji’s good-natured banter was delightful to watch, despite their awareness of the chinks in each other’s armour. But truth be told, no husband ever born has been spared by femininity!

Gurudev was a hard taskmaster who would often put his disciples through trials by fire. Unable to meet the high standards he set for us; we were routinely at the receiving end of his reproach. It was then that Mataji would transform into a fierce defence lawyer on our behalf, fighting our cases valiantly in Judge G’s courtroom while we would hide from his gaze. Alas, poetic justice happens to the Gods and the Greats when they get straightened by their wives!

Mataji treated us as if we were her own children. She defended us, genuinely cared about our well-being, and cheered us on as we navigated the snakes and ladders of Guruism. She was a spiritual force in her own right as well as a strong supporter of her husband and a mother figure to his disciples.

When a disciple hosted his daughter’s engagement ceremony, he was surprised to find more guests there than he had invited. He was dismayed at the prospect of food falling short and the attendees going hungry. When Mataji arrived at the venue, the disciple informed her of his predicament. She requested that he accompany her to the kitchen. When she arrived, she peered into the containers of the cooked food and covered them with lids. She then instructed those present not to look into the vessels while the food was being served. The food prepared for about 150 people turned out to be more than enough to feed around 250 people who showed up. When this disciple apprised Gurudev about what had happened, his guru remarked, “Your mother is Annapurna”(the giver of food and nourishment).

When a disciple’s son suffered multiple skull fractures in an automobile accident, his parents sought help from the sthan (centre for help and healing). Mataji arrived at the hospital the next day and placed her hands on the boy’s head. She walked away after assuring the parents that everything would be fine. A week later, the MRI scan revealed only one microfracture on the skull!

Mataji’s single-minded focus carried Gurudev’s legacy of nisvarth seva forward after his passing. Her dedication to this cause reflected her undying love for her husband and his selfless work.

In May of 2014, Mataji passed away. On the day of her death, the stars were auspiciously aligned. It was a queen’s muhurat (auspicious time) given to very few, indicative of her exalted spiritual status. In this lifetime,

Gurudev and Mataji’s relationship may have been that of a married couple, but in essence, it was and possibly continues to be an exceptionally powerful spiritual alliance.

PREV  <<  THE BONDS OF FRIENDSHIP

Need help? Reach out to us at answers@gurudevonline.com