The little mischief-maker, too quick-footed for her,
soon grew from a child to a man.
But he never forgot the sacrifices she made
like only a mother can. 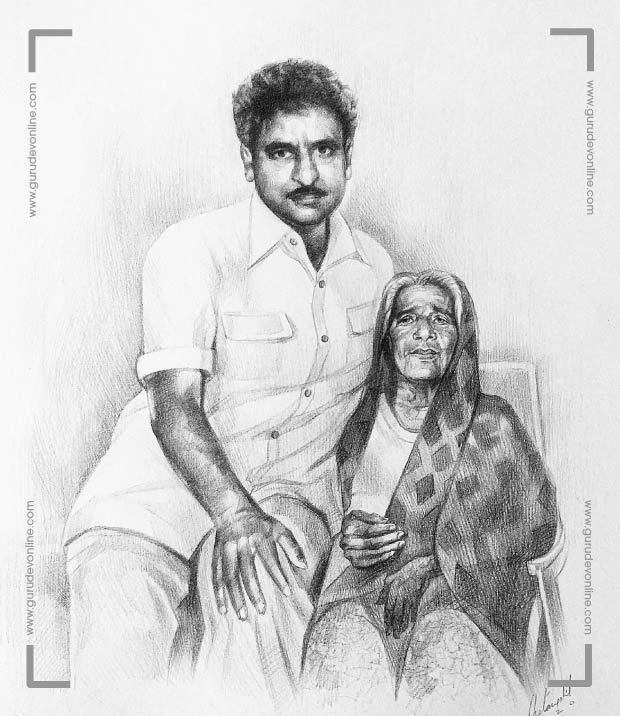 Gurudev always said that a person has three gurus in his life: his parents, teachers, and, most importantly, his spiritual guide and mentor.

Aware of the enormous debt owed to one’s parents, he encouraged his disciples, devotees, and followers to care for and respect them.

Gurudev was very close to his parents, especially his mother. When he was a child, his mother developed blisters on the soles of her feet, chasing after him in the hope that he would stop scurrying around and focus on his studies. She may have honed her athletic skills but could not rein in her son’s naughty streak. Her devotion may have triggered a deep gratitude in him, augmenting his philosophy of service before self.

Gurudev’s interest in spiritualism intensified as he grew older. In a world where mobile phones were an invention of the future, his fondness for spiritual adventurism caused his mother constant stress. He would disappear for hours and sometimes days, gathering spiritual insights in the company of mystics.

He was drafted into the Army after graduating from high school. His mother was opposed to her eldest son joining a high-risk profession, so he opted out of a career in the Indian Armed Forces at her insistence. He toyed with the idea of becoming an actor because he was an avid moviegoer. Fortunately for the millions, he would serve in the future, his application to the Film and Television Institute of India (FTII) was turned down.

Even though his celluloid dreams were nipped in the bud, he learned the art of role-playing better than most. I once witnessed a powerful demonstration of his acting skills at the Khandsa farm in Gurgaon.

Billu, a devotee, loved his liquor more than his liver. He had a perplexing relationship with his guru.

Gurudev would ask Billu to quit alcohol.
Billu would promise that he would.
Billu would break his promise.
Drink. Promise. Repeat.

One evening, as Gurudev sat in the cowshed explaining spiritual concepts to me, Billu sauntered in, reeking of alcohol and broken promises. I noticed Gurudev’s expression change upon seeing him. When Billu made a lame attempt to defend his inability to quit alcohol, Gurudev’s patience wore out. Billu was on the receiving end of the kind of anger I had never seen my guru express before. As he spat fire, Billu and I cowered, trembling with fear. After a harsh dressing-down, Billu left the shed with his tail between his legs. As soon as he was out of sight, Gurudev turned to me, smiled, and said, “Barkhurdar, kaisi lagi hamari acting?” (What did you think of my performance?). The cat got my tongue as my jaw hit the floor!

Gurudev used role-play as an effective tool. When he played the role of a father, he was strict or indulgent. As a friend, his arsenal of wisecracks had us rolling with laughter, but as a mahaguru, he was intense and formal in his demeanour, inspiring awe and respect. Seeing the master role-player in action prompted me and a few others to hone our role-playing skills.

The premature end to Gurudev’s dream of becoming an actor was the play of providence as he was destined to become a spiritual hero unlike any the world has ever seen!