In a northern town in the pristine hills,
he helped a lakh or more.
Bent spines were straightened
and the sick were healed
of ailments that had no cure. 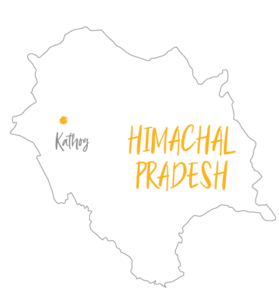 Himachal Pradesh is famous for its Shakti temples, of which Naina Devi, Jwalamukhi, Chintpurni, Chamunda Devi, and Brajeshwari Devi are the most well-known.

Kathog is a sparsely populated town in the Kangra District where Gurudev and his soil survey team set up camp in 1976. They stayed in a teacher’s dorm across the street from a school. In May of that year, Gurudev decided to start seva there. He asked a few of his Delhi-based disciples to join him. To everyone’s surprise, thousands of people came from nearby areas to seek his help, healing, and blessings.

Thapa, a tantrik who lived in a small shack across the road from the dorm, was sceptical and suspicious of the events. He was convinced that the man who dazzled the people of Kathog by displaying an OM and trishul on his hand was an illusionist. Thapa decided one night that it was time to call the illusionist’s bluff. He dispatched a powerful spirit under his command to instil the fear of god in Gurudev. Then he waited for the spirit to return and grew agitated as seconds turned into minutes and minutes into hours. When the sun rose, he went to the dorm to figure out what had happened. Gurudev invited him inside when he noticed him peering through a slightly ajar door. When Thapa cautiously entered the room, the mahaguru laughed and said, “You need to stop taking these silly tests!”. Thapa realised right then and there that Gurudev was no illusionist. He begged his pardon, replacing doubt with devotion.

Suresh Kohli, a teacher at the school across the dorm, found out about Gurudev from Thapa. Suresh ji dismissed Thapa’s words, assuming they were spoken under the influence of alcohol Thapa consumed regularly. Nonetheless, Suresh ji’s curiosity got the better of him, and he set out to meet the man whose miracles had captivated the small town.

Gurudev greeted him warmly and poured him a cup of tea. During the ensuing conversation, Suresh ji asked Gurudev if he could help him meet the supreme power. Gurudev instructed him to meditate at night with a glass of water kept by his side. Suresh ji recalled seeing a vision of Gurudev in his home temple while sitting in meditation that night. The image appeared for seven nights in a row. However, nothing happened on the eighth night.

On the ninth day, he returned to meet the mahaguru. Gurudev greeted him with the words, “Hun mainu ess tarah vekhiya Masterji, te samajhna rab nu paa lita!” (From now on, whenever you see a vision of me, know that you have met the supreme power). Suresh ji recognised Gurudev as more than a saint and bowed at his feet.

As the crowds at Kathog swelled, Gurudev began seva at the school premises to accommodate the large number of people who came. When he needed more hands-on-deck, he initiated several teachers from the same school, like Suresh ji, Shambhu ji, and Santosh ji, into seva by making them drink the jal he had sipped. Over the next few days, men with no practical knowledge of spiritualism (in this lifetime) became spiritual healers.

Gurudev performed some extraordinary spiritual feats at Kathog. He would sprinkle jal on large crowds, instantly curing the sick. He put his hands on the back and torso of a man with a bent spine one day and permanently straightened it in minutes.

Gurudev heals a man with a bent spine at Kathog

According to Raji Sharma ji, Kathog served as a springboard for Gurudev’s ascent to the spiritual exosphere. Gurudev is said to have helped and healed hundreds of thousands of people in this small town, earning him the sobriquet ‘OM wale Baba’.

NEXT  >>  THE HEALER EXTRAORDINAIRE