With the immortal one, a bond was forged
to help and serve mankind.
To date they collaborate
to alleviate the suffering of body and mind. 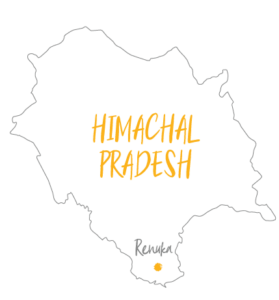 Renuka, a small town in the Sirmaur District of Himachal Pradesh, is believed to be part of the spiritual domain of Parshuram ji, the immortal son of Renuka Devi and her husband, Saptarishi Jamadagni.

In 1980, Gurudev set up camp in Renuka on a plot owned by a local politician, Shri Chandramani Vashisht. After settling in, Gurudev asked Bittu ji to clean and refurbish an old shivling situated on the campsite. Vashisht ji came to the camp after a few weeks to pray at the shivling. He was adamant about meeting Gurudev. Since the mahaguru was in Delhi then, he inquired of Bittu ji whether Gurudev wore glasses. He left with a puzzled expression after being told he didn’t.

Vashisht ji posed the same question to the mahaguru when he returned a few days later. “I am a young man”, Gurudev laughed. “I don’t need glasses just yet”. Gurudev showed Vashisht ji the OM on his hand after serving him a cup of tea. On seeing the luminous symbol, he prostrated at Gurudev’s feet. He admitted to seeing images of various deities flash sequentially while meditating. This meditative slideshow would always end with a picture of a bespectacled man dressed in pants and a shirt, resembling Gurudev. “Son, I was supposed to come here in 1970, but I arrived in 1980”, Gurudev said with a smile. “You’ve been waiting for me for ten years!”

Soon after, Gurudev decided to begin seva at Renuka. He motioned for a few disciples to join him. He followed up on the verbal instruction with another; they had to conceal his identity and be the face of the seva. Since Renuka was sparsely populated, the disciples did not expect large crowds. However, as the hours passed, countless people descended on the remote location from nearby areas.

When the seva concluded that day, Gurudev told his disciples and a few others present to return to Renuka the following Thursday. He informed them that his voice had travelled far beyond the mountains and that a large crowd was expected. He also suggested that the disciples arrive the night before the day of seva. And so, a group of ten or eleven disciples arrived at the campsite the following Wednesday night to find a two-kilometre-long queue awaiting them. Gurudev directed them to attend to people as soon as possible.

The seva that began at night lasted all through the next day. After seventeen hours of continuous seva, a disciple recalled being unable to lift his arm to heal people. Sensing his discomfort, Gurudev gave him a glass of jal to drink, instantly rejuvenating him.

During the three days of seva, Renuka received visitors from far and wide. Some people walked while others drove to the location. Buses from Himachal Pradesh and the adjoining states of Haryana, Punjab, and Rajasthan dropped passengers near the campsite every few hours. In fact, Haryana and Punjab Roadways specifically diverted a few buses to Renuka to meet the unexpected demand.

Among the many people who came to Renuka was a young girl who couldn’t stand without support. Her parents, who lived in a remote village, walked the steep path to Renuka while carrying their disabled daughter on their backs. They pleaded with Gurudev’s disciple, Sitaram Taki ji, who was attending to the queue in which they stood, to heal their child. Sitaram ji sought his guru’s guidance. Following the mahguru’s advice, Sitaram ji stood on the girl’s toes while another disciple, RP Sharma ji, held her hands and lifted her forcefully. The girl stood up and walked gingerly for the first time, leaving everyone speechless. Her parents sobbed joyfully and thanked the healers, saying, “Aap ka bhala ho!” (May destiny smile on you!).

As word of the miracles at Renuka spread, the Himachal Government dispatched a team of officers to investigate. They took a sample of the jal to a nearby laboratory, only to find it immaculately pure. Newspapers such as The Tribune dispatched reporters to cover events in a town many had never heard of before.

The Renuka camp not only demonstrated Gurudev’s unfathomable spiritual powers but also served as a reminder that seva requires sacrifice. The mahaguru’s disciples served people tirelessly without regard for their own comfort or well-being.

Nisvarth seva was, is
and will always be
the cornerstone of
Gurudev’s spiritual philosophy.

Gurudev is said to have had spiritual meetings with Parshuram ji before beginning seva at Renuka. In 1980, they formed an alliance that resulted in the establishment of a sthan. Vashisht ji, a disciple of Gurudev and Parshuram ji, took over the reins. Before his death, he appointed his disciple, Dinesh ji, to carry the baton of seva. It is believed that Parshuram ji still visits the sthan to keep an eye on things.

Gurudev set up camps in many places, including Renuka and Kathog, and formed alliances with the deities who ruled there. In addition to Parshuram ji, Renuka Devi and the female deities of Himachal, the mahaguru formed spiritual alliances with many other saints for seva. These include Khawaja Moinuddin Chishti, Shri Markandeshwar, Baba Balak Nath, Ganpati, the Sikh Gurus – Guru Nanak Dev, Guru Gobind Singh and Guru Angad Dev, Hanuman ji, the Ashvin Kumaras, Dattatreya, Sai Baba of Shirdi, Indra, and possibly many others.

Please reflect – A spiritual superstar like Parshuram ji found it worth his while to collaborate in establishing a sthan and partaking in its sustenance. If seva can serve as an incentive for an immortal spiritual heavyweight like him, then perhaps everyone should pay more attention to the philosophy and practice of selfless service.

PREV  <<  MIRACLES UP HIS SLEEVE