On a rainy day was born an enlightened saint
as the harsh cold turned to spring.
He would live true to his given name,
rise to become the King of Kings.

On an overcast day in the early spring of 1938, Gurudev was born into a simple Brahmin family consisting of his parents, elder sister, and maternal grandparents. His father, Bhagat Ram ji, a chemicals trader by profession, and his mother, Ram Pyari ji, were a simple and kind couple. 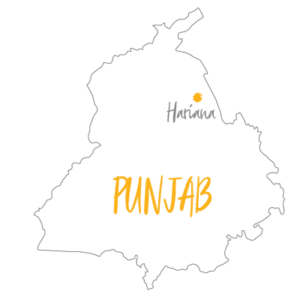 Gurudev’s birthplace, Hariana, was a small hamlet in the Hoshiarpur district of Punjab, India. Its small population of Muslims and Hindus were a paragon of communal harmony. Before relocating to Hariana, sometime before Gurudev’s birth, his family lived in the state capital of Amritsar. As Gurudev’s mother could not conceive after the birth of her first child, a daughter named Bimla, his paternal grandfather contacted a sant (saint) at the Golden Temple to seek divine intervention. The sant gave Gurudev’s mother jal (sanctified water) to drink for forty days. Gurudev was conceived soon after. The sant instructed Gurudev’s parents to name their unborn child Sant Prakash which means an enlightened saint. However, when the skies opened shortly after his birth, his grandmother saw the inclement weather as a good omen. Fueled by a desire to pay homage to the god of rain for what she perceived as a blessing, she insisted upon a name for her grandson that included ‘Indra’ (the rain god in Hindu mythology). To honour her wish, Gurudev’s parents named their newborn Rajinder, which means King of Kings. Decades later, Gurudev would acquire the ability to control rain and many other elements of nature.

Sage Brighu, one of the seven great sages of Hinduism, wrote the Brighu Samhita thousands of years ago and knew that this realised soul was destined to be named Rajinder and not Sant Prakash. The Samhita had this to say about Gurudev– ‘An ansh (part) of Shiv will take birth in a village named Hariana, and his name will begin with Raj.’

The first indication that Gurudev did not have an ordinary future came when he was only a few weeks old. A Muslim carpenter known to his father presented the family with a handcrafted wooden crib on the baby’s birth. One spring morning, Gurudev’s mother placed her infant son in the crib on the terrace of their house, only to return a few minutes later to find a hooded cobra seated on him. As she stood paralysed with fear, the cobra slid away and disappeared through a crevice in the wall. Unsure of what the cobra sighting meant, Gurudev’s parents consulted a temple priest who told them that it was an excellent omen, indicative of the boy’s exalted future. A similar prophecy was made by a sadhu (ascetic) who visited Gurudev’s house a few years later. He informed Gurudev’s mother that her son would become a powerful saint, ‘someone like Shiv’, when he turned thirty-five.

Shiv is a power amalgam of a set of qualities and attributes. A person who has spiritually evolved to achieve a state of mukti can be defined as a manifestation of Shiv. Such a being could either be in human or ethereal form. Some of the manifestations of Shiv in human form are Hanuman, Parshuram, Gurudev, Buddhe Baba, Gorakshnath, Jesus, Guru Nanak, Guru Gobind Singh, etc.

Gurudev’s early years were seeped in normalcy despite predictions of his future being anything but ordinary. When he was around five years old, he joined DAV Modern School in Hariana and studied Hindi, Urdu, and Farsi. His schoolmates remembered him as an easy-going boy who preferred mischief over academics and made friends with ease.

In 1948, Gurudev was struck by a debilitating illness after consuming food offered to him by an acquaintance. Despite receiving medical attention, he found no relief and was eventually bed-ridden. Desperate for a cure, his mother insisted on taking him to the famous temple of Baba Balak Nath in Himachal Pradesh. His parents undertook the herculean task of carrying their immobile son across many kilometres of mountain road leading to the temple. On reaching there, a disciple of Baba Balak Nath gave Gurudev jal to drink, and on drinking it, he vomited buttermilk and masaan (ashes).

Gurudev’s wife, Mataji, believed the miraculous recovery that followed left an indelible mark on him and may have triggered his quest for spiritual knowledge.

Healed and mobile, Gurudev returned to his mischievous ways. He and his schoolmate, Subbhash Sabharwal, would race back from school, making pit stops to pluck fruits from the fields lining their path. Acting on the complaints of angry farmers whose fruits had been picked, Gurudev’s father would berate and threaten him with dire consequences if he did not mend his naughty ways, but his son remained unfazed.

During a fruit picking escapade at a dargah, Gurudev and Subbhash were caught red-handed by a fakir (mystic) who lived there. He asked the boys to bow their heads at the shrine to atone for the act. They did as instructed. Following this incident, Gurudev returned to the dargah regularly to spend time with the fakir. This time, the desire was for the fruit of spiritual knowledge